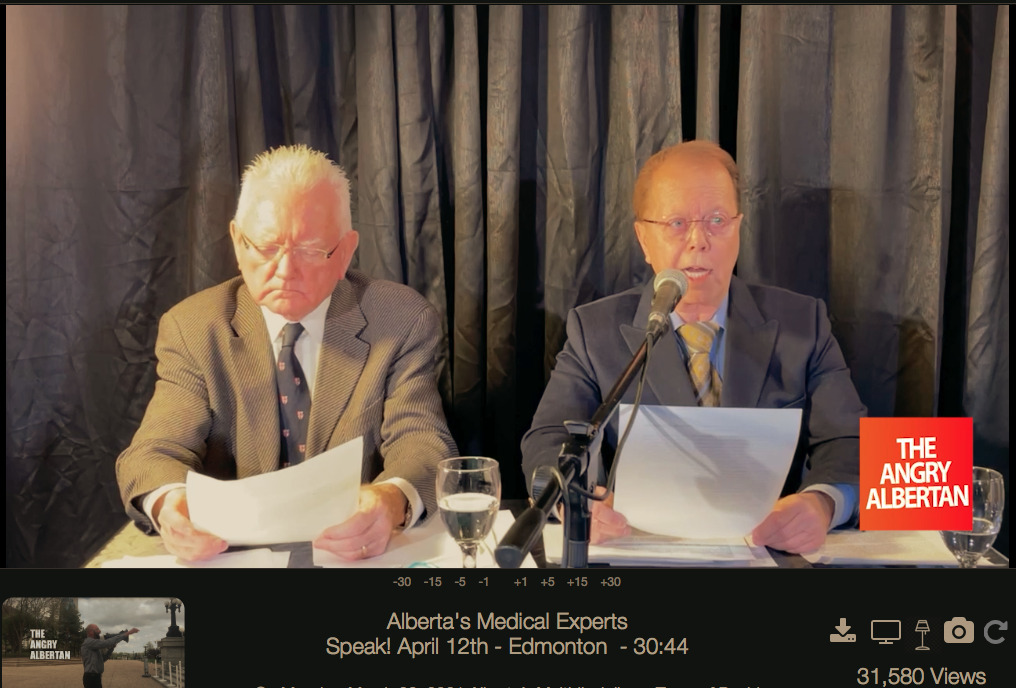 The above video is a mite dry, but it is invaluable as it covers much ground on the now available evidence that the panic that has been instilled in us by our government reps & mainstream media since day one of the “pandemic”, has not in fact been founded on science or data. Dr. Roger Hodkinson & Dr. Dennis Modry offer a wealth of information & fact as they “follow the evidence”…

HOW COULD THEY POSSIBLY ALL BE WRONG???

Everyone asks the same question – How could they ALL be wrong – all the world’s media, all the world’s governments, institutions, doctors, scientists? How could any of it possibly be untrue on such a grand scale? This is our attempt to bring as many pieces of an extremely complex puzzle together, to try to look into this very good question, to try to understand.

To imagine that all the various sectors mentioned above could be in collusion with one another seems to be ridiculous on its face, & impossible to believe. But when one factors in that there really only needs to be one very well placed person near or at the top of each organization to be able to shape the narrative that trickles down from the top. And then when one factors in that these individuals have been part of behind-the-scenes planning through organizations such as the Bilderberg Group, the WEF (World Economic Forum), the CFR (Council on Foreign Relations), the Trilateral Commission, etc. which are all comprised of the most powerful, wealthy, and influential people on the planet. Then consider too that these organizations seem to have been shaping or directing many of the world’s events from behind the scenes for a very long time (decades at least), then it begins to seem more than a little plausible.

There will be a lot of information on this page – not for the faint of heart or those with busy schedules. So take as much or as little as you like, and bear in mind that this is just a jumping off point for your own research, should you choose to continue. The sources I use will endeavour to be the most credible, factual, I can find. Let’s get started. 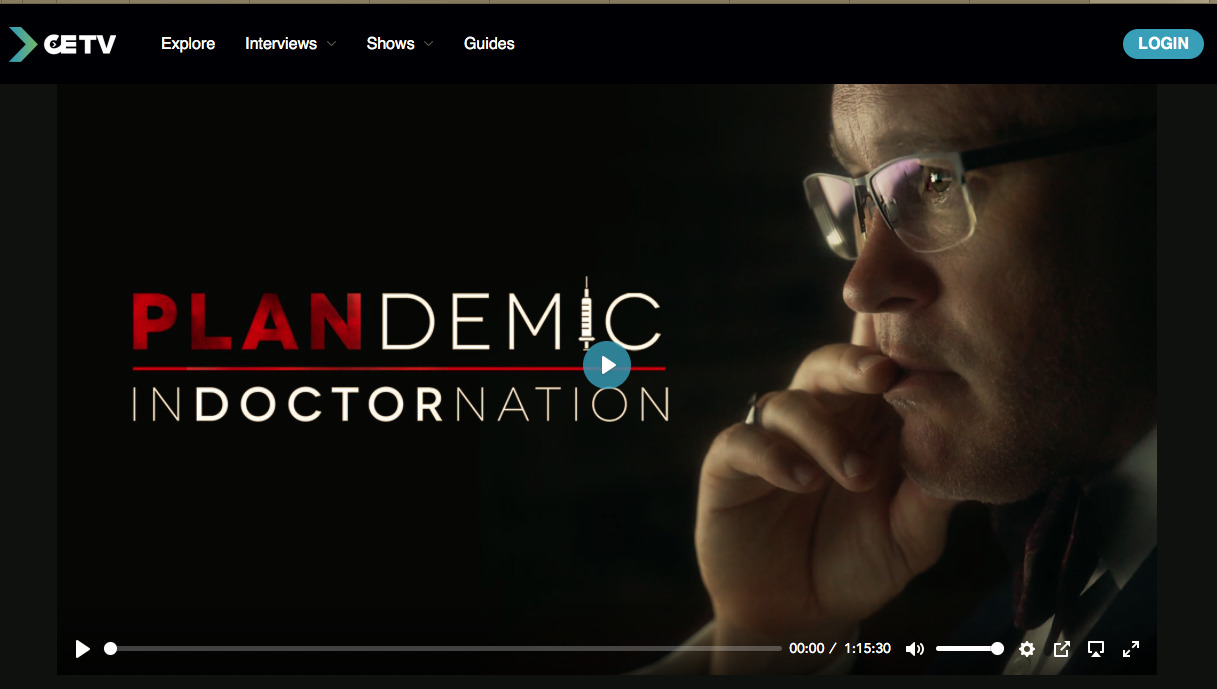 The World Economic Forum (WEF), along with Bill Gates, seems indeed to be at the very centre of the Covid P(l)andemic.

Please see the first video offered below (The Amazing Polly) to begin connecting some very important, and quite well hidden dots on this subject.

Here also is a short list of just a very few of the WEF’s partners, each of which is powerful & influential in its own right, each of which has a stake in and will profit from global lockdown in some way, and/or is part of getting a One World Government off the ground:

The AMAZING POLLY – While this lady seems to sort of be trumpeting her own horn, she has indeed done a brilliant job of connecting some very important dots. Here she looks at some of the major institutions, some of them relatively unknown, that have been calling the shots during this pandemic, and how it is that one extremely powerful and influential man seems to be controlling virtually all of them, a man by the name of Bill Gates. 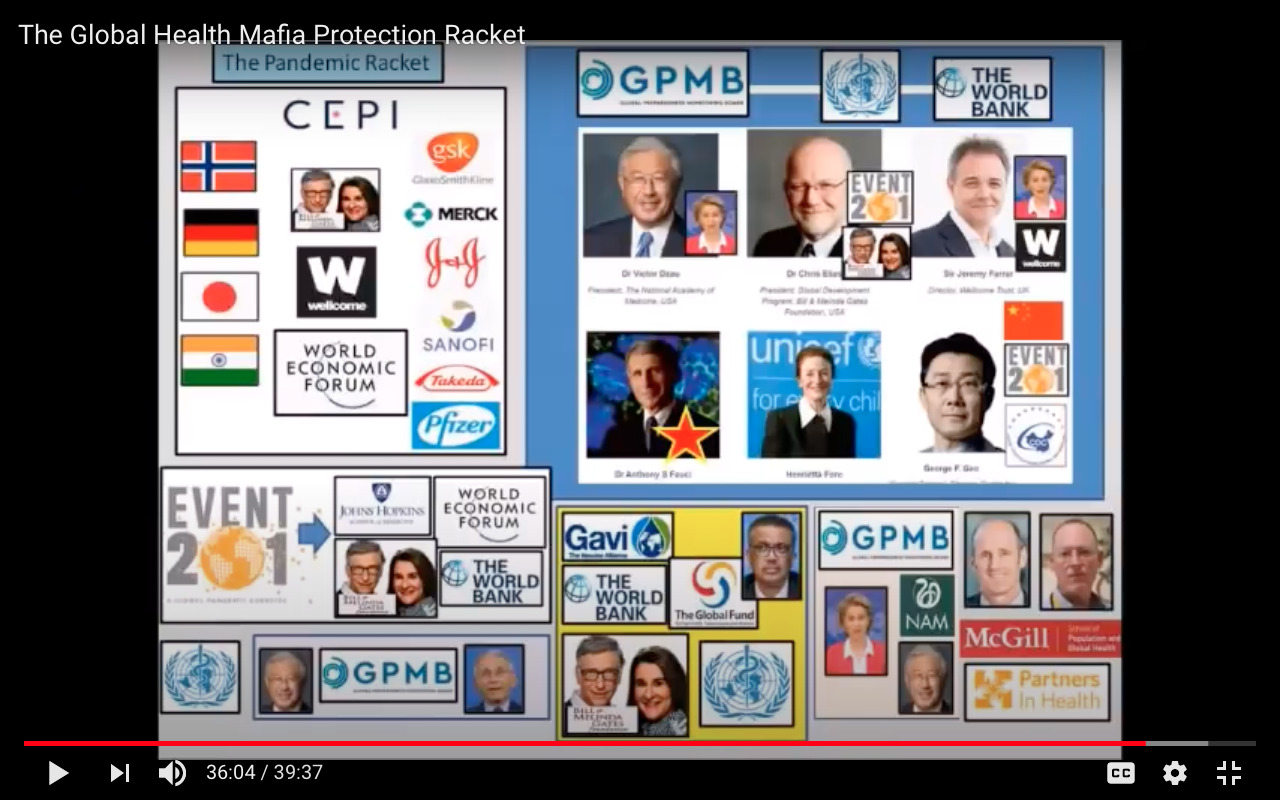 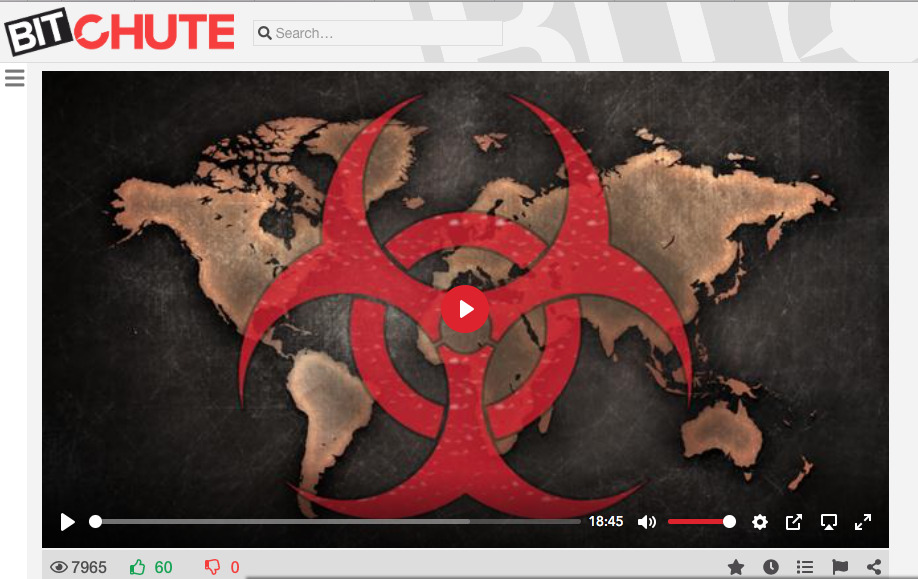 SPIRO SKOURAS – Another fabulous researcher who sources everything and backs up everything he says with references, video footage of the people he exposes actaully saying the very same thing, govt. documents, etc.  This video is titled DID BILL GATES & WORLD ECONOMIC FORUM PREDICT CORONAVIRUS OUTBREAK? AN INSIDE LOOK MAY SHOCK YOU!

There have long been secret societies and organizations that have sought to bring about a one world government from behind the scenes for a very long time. Many excellent books have been written on the subject by people far more qualified than me, but here are a few names to get started with, for those who are new to the subject:

in 2019 The notorious Bilderberg Group hosted its secretive annual meeting. Among the attendees were World Economic Forum President – Børge Brende, the founder and CEO of Alphabet (“Parent” company of GOOGLE) along with the Technical Advisor of Alphabet,  the former National Security Advisor to 2 Presidents – Henry Kissinger (who is now openly advocating for New World Order control of this crises in interviews), Jared Kushner – Senior Advisor to the US President, the CEO of Microsoft – Satya Nadella, Jens Stoltenberg – Secretary General of NATO, and many others.

Bilderberg, co-founded by David Rockefeller, has been conducting behind closed doors meeting since the 1950’s. Only the most powerful and influential men & women, heads of governments, heads of global banking systems, heads of military, etc. are invited to attend. Media is also invited with the proviso that nothing of what goes on there is ever reported on. Bilderberg was co-founded by David Rockefeller, and its hidden agenda, according to those who have studied this secretive group, is world government, or global domination.

The below infographic is an illustration of how media is controlled by various Bilderberg Group, CFR, and Trilateral Commission members. Much more investigation is needed to flesh this out, and I’ll continue to add to this research as I’m able. I’ll provide a few links for others who wish to research further. If anyone comes across a well researched paper complete with sources and references please contact us at beingfree@mailfence.com  – Thank you

One of the best researchers on the Bilderberg Group seems to be Daniel Estulin – https://libertyinternational.wordpress.com/2020/03/03/the-true-story-of-the-bilderberg-group-and-what-they-may-be-planning-now-a-review-of-daniel-estulins-book-global-research/

The Council on Foreign Relations openly states on its website, its goal of globalization. The CFR was funded by David Rockefeller (also the co-founder of the Bilderberg group): https://www.anderson4theconstitution.com/cfrandtrilateralandnwo.pdf 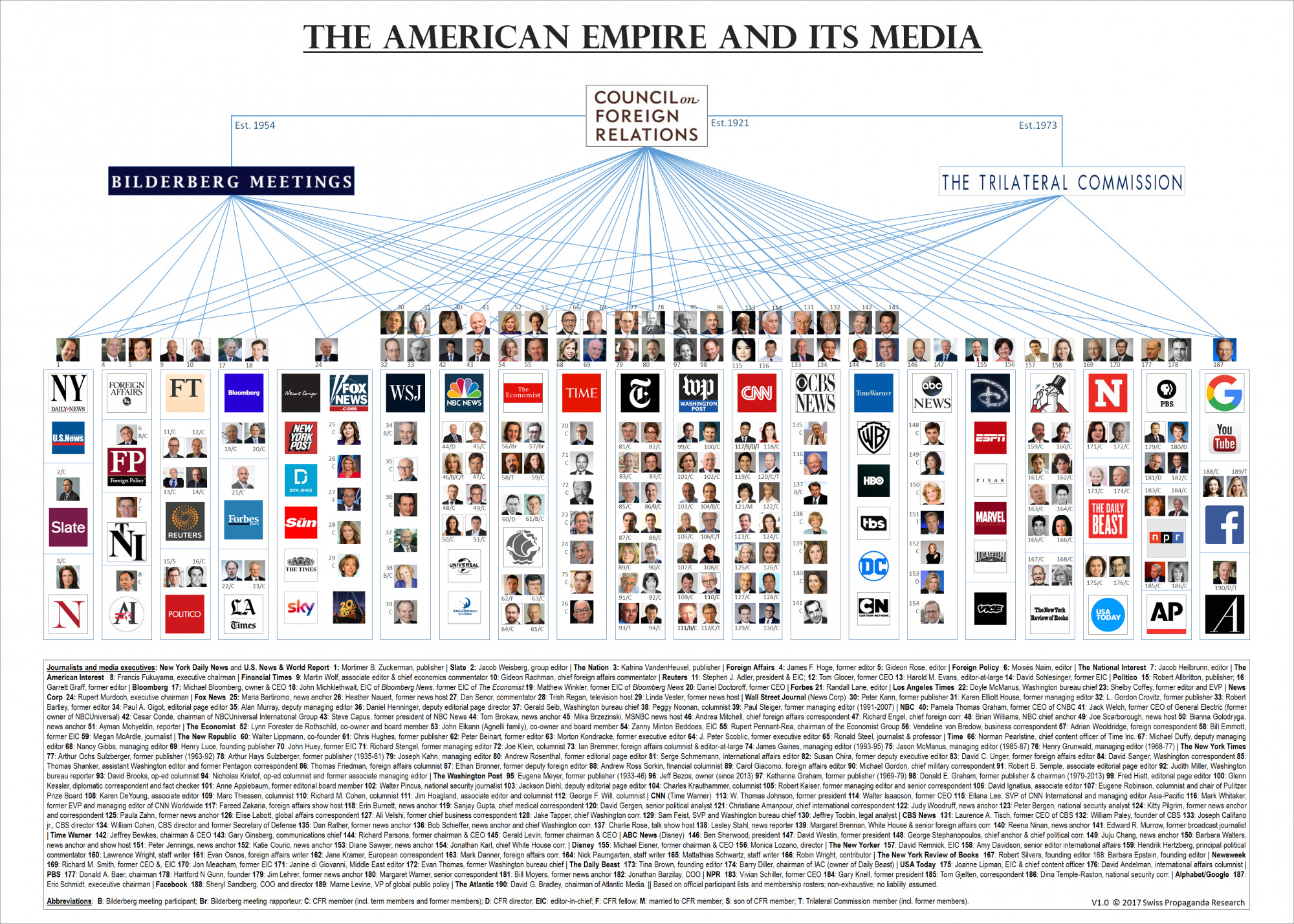 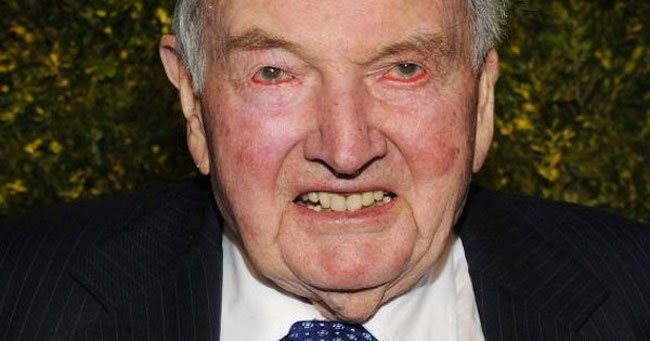 “We are grateful to the Washington Post, the New York Times, Time Magazine and other great publications whose directors have attended our meetings and respected their promises of discretion for almost 40 years……It would have been impossible for us to develop our plan for the world if we had been subjected to the lights of publicity during those years. But, the world is more sophisticated and prepared to march towards a world government. The supernational sovereignty of an intellectual elite and world bankers is surely preferable to the national autodetermination practiced in past centuries.”

David Rockefeller – Co-founder of the Trilateral Commission & The Bilderberg Group,

“The New World Order will have to be built from the bottom up rather than from the top down … run around national sovereignty, eroding it piece by piece will accomplish much more than the old-fashioned frontal assault.” 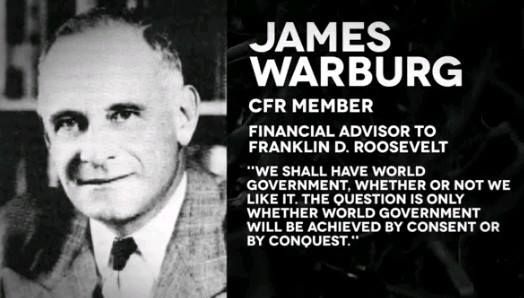 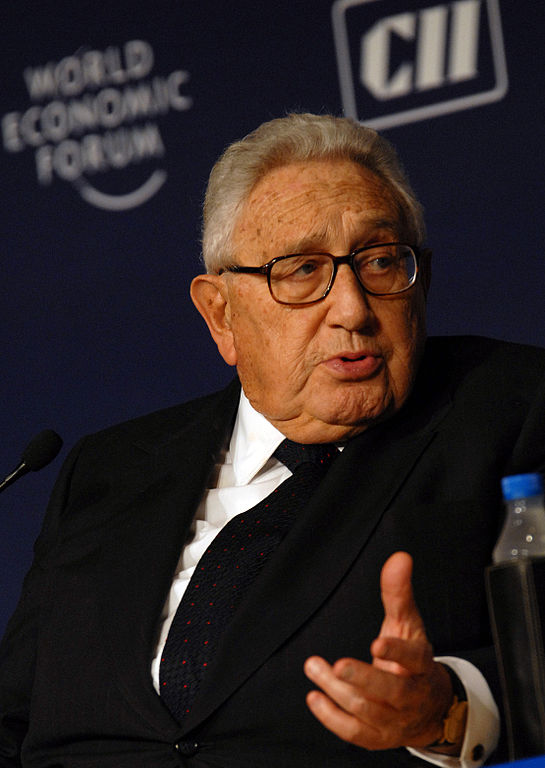 “Today Americans would be outraged if U.N. troops entered Los Angeles to restore order; tomorrow they will be grateful. This is especially true if they were told there was an outside threat from beyond, whether real or promulgated, that threatened our very existence. It is then that all peoples of the world will plead with world leaders to deliver them from this evil. The one thing every man fears is the unknown. When presented with this scenario, individual rights will be willingly relinquished for the guarantee of their well being granted to them by their world government.”

US Secretary of State Henry Kissinger.)

“The technotronic era involves the gradual appearance of a more controlled society. Such a society would be dominated by an elite, unrestrained by traditional values. Soon it will be possible to assert almost continuous surveillance over every citizen and maintain up-to-date complete files containing even the most personal information about the citizen. These files will be subject to instantaneous retrieval by the authorities.” 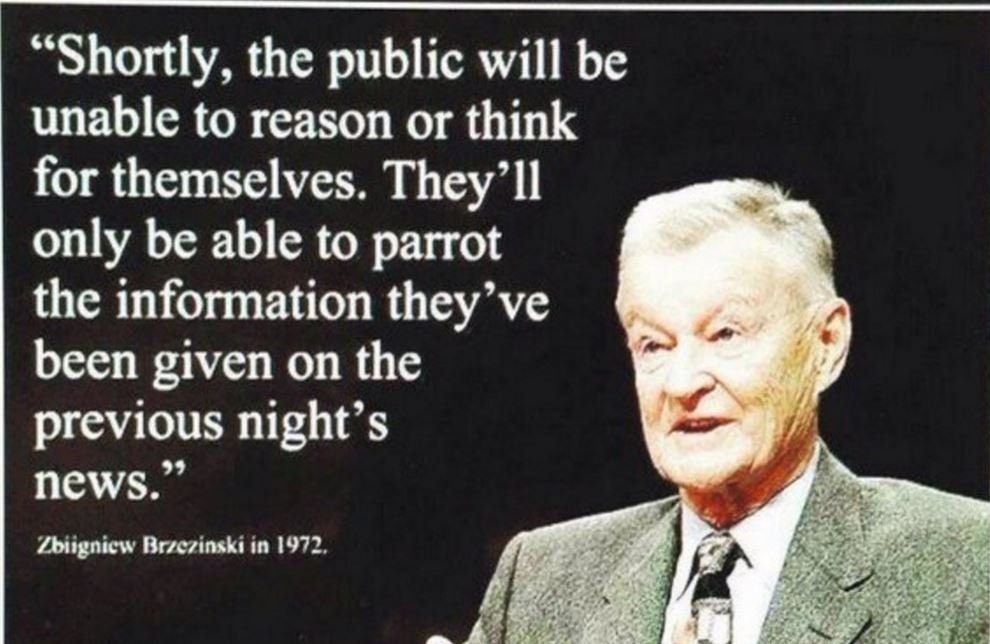