MASKS – Do they Really Protect US as we’ve Been Told?

Here you will find information that mainstream media no longer seems to print, and the internet, via GOOGLE, FACEBOOK, Youtube, and many other platforms, regularly censors in the name of curtailing what they call “fake news”. Scroll down to see reports by doctors, scientists & other experts. 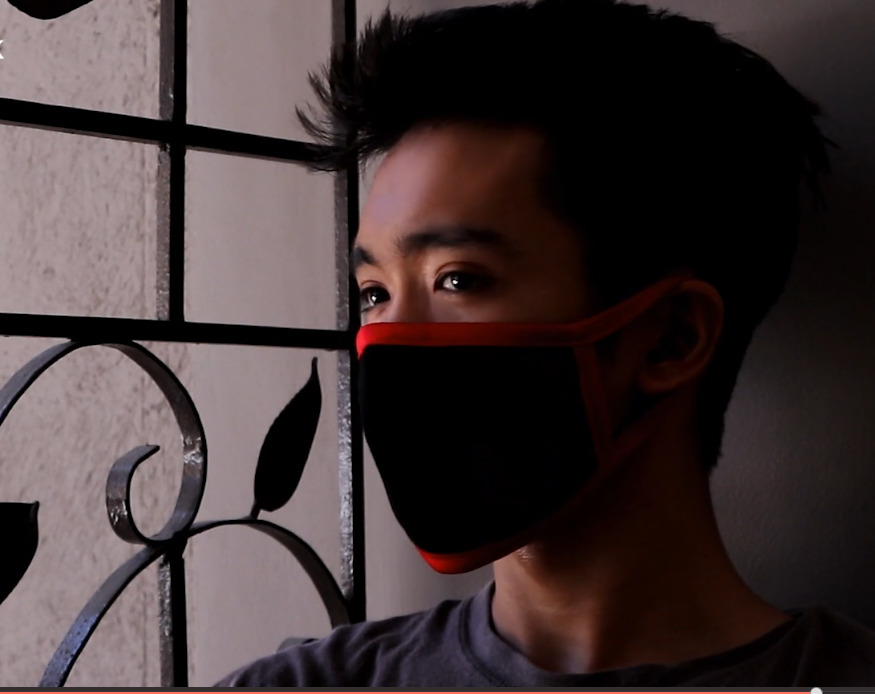 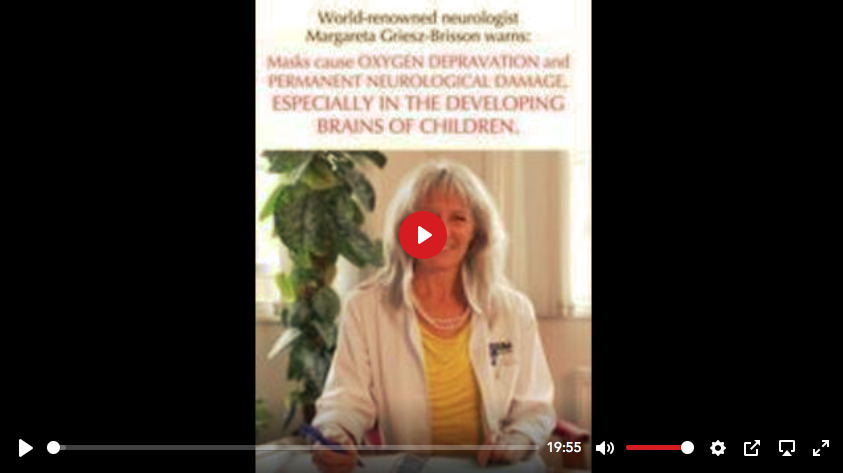 Dr. Margarite Griesz-Brisson MD, PhD is a Consultant Neurologist and Neurophysiologist with a PhD in Pharmacology, with special interest in neurotoxicology, environmental medicine, neuroregeneration and neuroplasticity. This is what she has to say about masks and their effects on our brains. Learn what re-breathing our own waste does to us, how masks decrease our oxygen intake, and what the ultimate damage to us, and particularly our children will be…Watch the Video to the left, or read the transcript here: https://jamesfetzer.org/2020/10/brain-damage-from-masks-cannot-be-reversed/

This is the most convincing video we’ve seen yet that demonstrates how ineffective masks are in preventing transmission of bacteria or viruses. If a picture is worth a thousand words, this video is possibly worth a million 🙂

This excellent demo by Doctor Ted Noel, an anesthesiologist with over thirty-six years experience using masks in operating rooms uses a simple method in this 5 minute video to show the efficacy & inefficacy of the various types of masks commonly being worn… 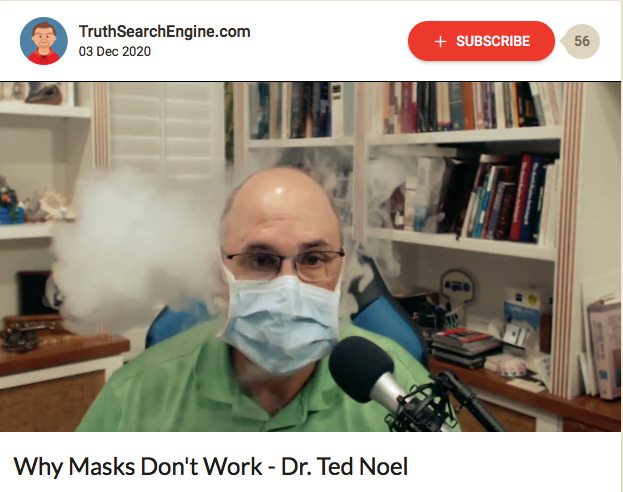 The following article was written by Arthur Firstenburg. He cites numerous studies that show that even surgical grade masks do not stop or even slow the transmission of bacteria, let alone viruses:

“Society is tearing its fabric apart by instituting measures that are protecting no one and are instead sickening and killing people. I will mention just one of those measures here: facial masks.

As a person who went to medical school, I was shocked when I read Neil Orr’s study, published in 1981 in the Annals of the Royal College of Surgeons of England. Dr. Orr was a surgeon in the Severalls Surgical Unit in Colchester. And for six months, from March through August 1980, the surgeons and staff in that unit decided to see what would happen if they did not wear masks during surgeries. They wore no masks for six months, and compared the rate of surgical wound infections from March through August 1980 with the rate of wound infections from March through August of the previous four years. And they discovered, to their amazement, that when nobody wore masks during surgeries, the rate of wound infections was less than half what it was when everyone wore masks. Their conclusion: “It would appear that minimum contamination can best be achieved by not wearing a mask at all” and that wearing a mask during surgery “is a standard procedure that could be abandoned.”

I was so amazed that I scoured the medical literature, sure that this was a fluke and that newer studies must show the utility of masks in preventing the spread of disease. But to my surprise the medical literature for the past forty-five years has been consistent: masks are useless in preventing the spread of disease and, if anything, are unsanitary objects that themselves spread bacteria and viruses.

Ritter et al., in 1975, found that “the wearing of a surgical face mask had no effect upon the overall operating room environmental contamination.”

Ha’eri and Wiley, in 1980, applied human albumin microspheres to the interior of surgical masks in 20 operations. At the end of each operation, wound washings were examined under the microscope. “Particle contamination of the wound was demonstrated in all experiments.”

Laslett and Sabin, in 1989, found that caps and masks were not necessary during cardiac catheterization. “No infections were found in any patient, regardless of whether a cap or mask was used,” they wrote. Sjøl and Kelbaek came to the same conclusion in 2002.

A review by Skinner and Sutton in 2001 concluded that “The evidence for discontinuing the use of surgical face masks would appear to be stronger than the evidence available to support their continued use.”

Lahme et al., in 2001, wrote that “surgical face masks worn by patients during regional anaesthesia, did not reduce the concentration of airborne bacteria over the operation field in our study. Thus they are dispensable.”

Figueiredo et al., in 2001, reported that in five years of doing peritoneal dialysis without masks, rates of peritonitis in their unit were no different than rates in hospitals where masks were worn.

Bahli did a systematic literature review in 2009 and found that “no significant difference in the incidence of postoperative wound infection was observed between masks groups and groups operated with no masks.”

Surgeons at the Karolinska Institute in Sweden, recognizing the lack of evidence supporting the use of masks, ceased requiring them in 2010 for anesthesiologists and other non-scrubbed personnel in the operating room. “Our decision to no longer require routine surgical masks for personnel not scrubbed for surgery is a departure from common practice. But the evidence to support this practice does not exist,” wrote Dr. Eva Sellden.

Lipp and Edwards reviewed the surgical literature in 2014 and found “no statistically significant difference in infection rates between the masked and unmasked group in any of the trials.” Vincent and Edwards updated this review in 2016 and the conclusion was the same.

Carøe, in a 2014 review based on four studies and 6,006 patients, wrote that “none of the four studies found a difference in the number of post-operative infections whether you used a surgical mask or not.”

Salassa and Swiontkowski, in 2014, investigated the necessity of scrubs, masks and head coverings in the operating room and concluded that “there is no evidence that these measures reduce the prevalence of surgical site infection.”

Da Zhou et al., reviewing the literature in 2015, concluded that “there is a lack of substantial evidence to support claims that facemasks protect either patient or surgeon from infectious contamination.”

Schools in China are now prohibiting students from wearing masks while exercising. Why? Because it was killing them. It was depriving them of oxygen and it was killing them. At least three children died during Physical Education classes — two of them while running on their school’s track while wearing a mask. And a 26-year-old man suffered a collapsed lung after running two and a half miles while wearing a mask.

“We are living in an atmosphere of permanent illness, of meaningless separation,” writes Benjamin Cherry in the Summer 2020 issue of New View magazine. A separation that is destroying lives, souls, and nature.  * from Christopher Fry, A Sleep of Prisoners, 1951.

A review of science relevant to COVID-19 social policy

The present paper about masks illustrates the degree to which governments, the mainstream media, and institutional propagandists can decide to operate in a science vacuum, or select only incomplete science that serves their interests. Such recklessness is also certainly the case with the current global lockdown of over 1 billion people, an unprecedented experiment in medical and political history.”

How is it possible that most people continue to believe everything our health authorities tell us, when so much of what we’ve been told has been completely contradictory in nature. Here is Just one example in a 5 minute video of Dr. Bonnie Henry… 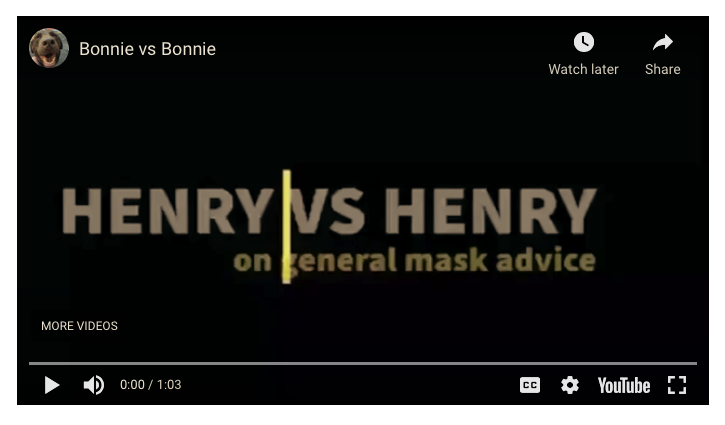 Masks Are Neither Effective Nor Safe: A Summary Of The Science

A review of the peer-reviewed medical literature examines impacts on human health, both immunological, as well as physiological.  The purpose of this paper is to examine data regarding the effectiveness of facemasks, as well as safety data.  The reason that both are examined in one paper is that for the general public as a whole, as well as for every individual, a risk-benefit analysis is necessary to guide decisions on if and when to wear a mask.

To read the full arcticle please go to https://www.technocracy.news/masks-are-neither-effective-nor-safe-a-summary-of-the-science/

While Del Bigtree gets on my nerves with what seems to be increasing arrogance, his interview with these two Occupational & Environmental Toxicologists who have spent many years in the field of TRAINING DOCTORS & SURGEONS on how to properly wear and use masks, is extremely important and relevant.

OSHA is the Occupational Safety & Health Administration in the U.S.

And from Dr. Anthony Fauci – leading expert on Covid-19 management in the U.S., the news is that even with the vaccine, we shall be expected to isolate, to distance, to mask up for others…

“The lawsuit says Trudeau and Ford have dispensed with their parliaments and are acting in a way that was constitutionally abolished some 350 years ago…The suit also says that measures like social distancing and masking are neither scientifically or medically based. They were invented in the context of this pandemic, there is no science behind them.” To read the entire article & hear Galati speak follow the link below… 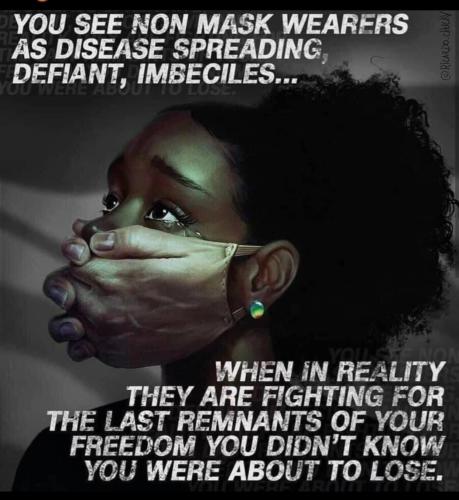